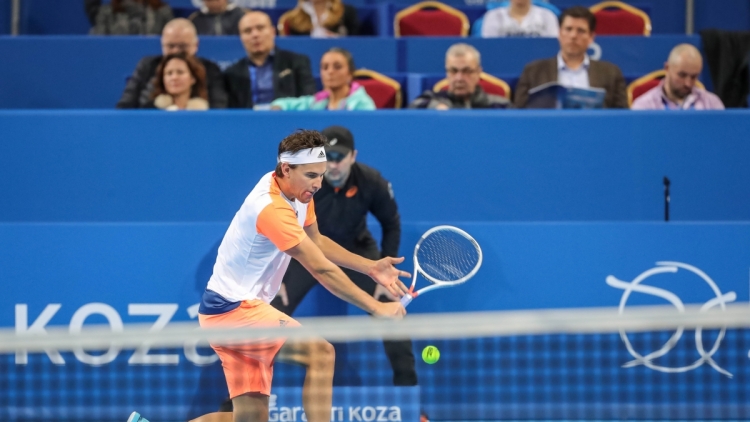 The first seeded Dominic Thiem has been knocked out of the Garanti Koza Sofia Open in his first match. The World No.8 was outlasted by Nikoloz Basilashvili 4:6, 4:6 in 78 minutes.

The Geogrian broke twice – once per set, and won with his fourth match ball.This is his biggest career win and second against top 10 player (first – against Thomas Berdich in Vienna).

The 24-year-old will face Next Martin Klizan.

“I think, I played really well. I played really well on my opponents points. I kept my focus for the whole match. I am looking forward to my next match. It is very special to beat a Top 10 player. Best wins of my career, if not the best one. This gives me better confidence for the upcoming match. It is going to be very difficult against Martin Klizan. I’ve never played with him before. It is tomorrow that I will plan how I will play against him”, couldn’t hide his delight Nikoloz Basilashvili.

Thiem couldn’t hide his disappointment after his lost. “Well, he played very fast. There were not many rallies. I couldn’t find my perfect rhythm. And balls are flying pretty fast. I never got in rhythm in the whole match. May be I had to adjust my game in the beginning but he played fast, he was going for the winners fast. All the credit to him, he played very good match. I was a little bit frustrated because I didn’t have any chances with his serve. He played backhand on the line and made a breakpoint. So, may be, I was a little bit unlucky”, said the NextGen star.