Cilic: It is a good chance to finish the season well

HomeNewsSofia Open 2020Cilic: It is a good chance to finish the... 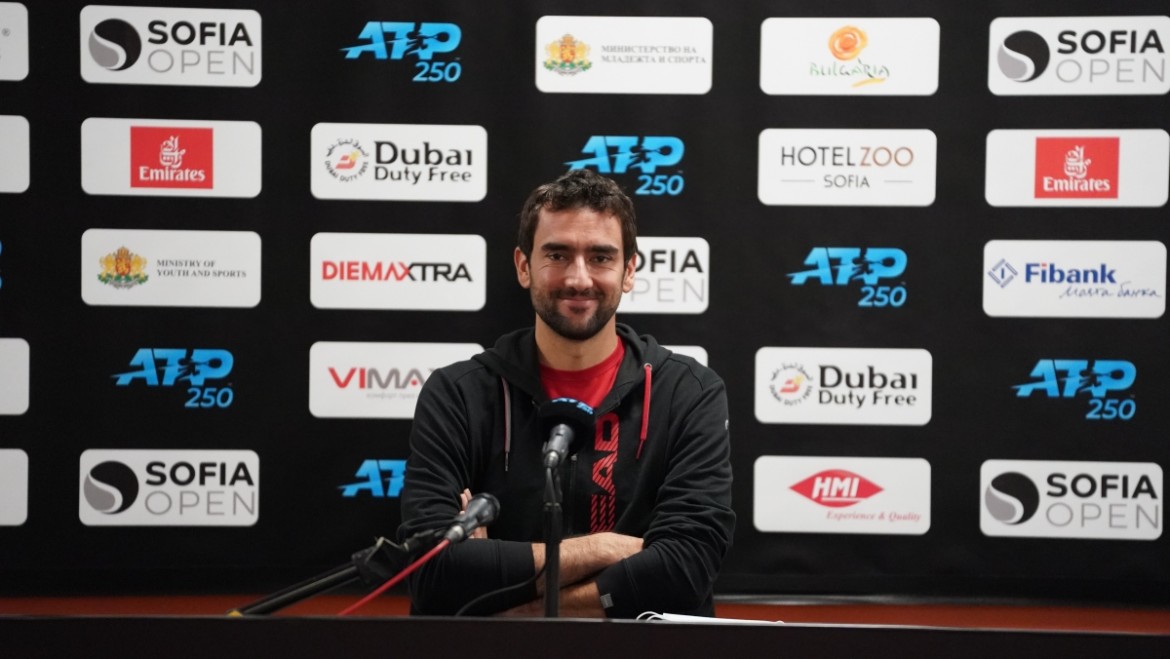 Former world No 3 Marin Cilic will make his debut at 2020 Sofia Open tomorrow. On Monday, on the Center Court of Arena Armeec he will play the Czech prodigy Jonas Forejtek.

The Croatian is already in Sofia and met the journalists on a special video press conference.

Marin, welcome to Sofia! Is this your first time in Sofia?

First of all, I am really happy. I’m first time here in Bulgaria, big sport nation. I’ve never had the chance to come and I am really glad I’m here. I am also happy that we are going to have at least some amount of fans during the week. That should be more fun than without any crowd at all.

For me, I had a good week in Paris last week, I had few good matches, and lost a very close match to Ugo Humbert who was in very good form. And coming here, hoping that I can play good tennis, I am going to take it match by match, and most importantly that I play well. And that’s always the thing that we players need to take care of our one side, on the court to play well. And the result will definitely take care of itself.

What do you know about Bulgarian sport besides tennis?

First that comes into my mind is Stoichkov. I remember really well all the matches with the football teams and the other great players from Bulgaria. We are very close with the language, we are very close as sport nations in different sports. Definitely football is something that connects these two counties. I also have to mention the weight lifter Nikolay Peshalov. He was competing for Croatia for many years, he is an incredible athlete. I’ve never met him, and haven’t been at the Olympics when he was competing, but I heard from my physio, who was also working with him at the time. And in Sydney he won a gold medal, I have a good memory of Bulgaria-through-Croatia success.

What are your goals here, in Sofia?

I believe for me it is a good chance to finish the season well. That’s the number 1 thing, to have a few good matches, good results, something positive, that can also start a little bit of a fire for the off season, and also for the next season. And the second thing is that I can use this week for some things I would like to implement in my game and possibly to start here with those things I would lie to do in the next season. Maybe different approach, nothing big that I would change in my game, just a couple of small details. It is also a good tournament for me to try and to see how it’s going to play. If it goas well, that’s great road map for me for the off season too.

The season hasn’t been the best in my own terms. I still feel that my level is not the level I was in 2018, 2017, also 2016. So that’s another thing, I am searching how to get back to that level. It is perfectly normal for me to see this ups and downs, we see it in many different sports, and also in individuals. It’s very common, everybody is going through different stages. It’s just a matter of keeping motivation high, working with my own team on things that I can do better and learning from those things. And hoping obviously that results are going into my favor to push that forward.

Is it harder to play against NextGen players than the players that are your age, or even older?

I didn’t play many matches against them [NextGen]. But last week I played against Humbert. We’ve never also practiced with him, it was the first time facing him. And I was facing him in a very good timing for him. He won the tournament in Antwerp, and had a victory against Tsitsipas. After that very long match he had a day off. And he played really well. It was not much that I did wrong in that match. It is much difficult to play with these young players when you don’t know them so well, when you don’t know their game, you didn’t play many matches against them. They are still developing and definitely very tricky. But it is also something to have motivation from. We have many young players. I believe they are around 18 to 20 in Top 50 that are around 25 and younger. So these younger players are pushing forward. And for us, the older players, 30+, need to keep developing, also improving, adapting our game, and keeping our motivation high.

What do you mean by saying that you haven’t achieved your best yet? You mean physically, or titles?

I would say, all in general. I feel that I can still develop as a player with my physicality. I think that I can still improve some technical details, and mental attitude, and everything. If I put that together and also combine it with good seasons, I can definitely reach my full potential. I feel that is not far. All of us that have been at the top of the game in Top 5, Top 10 don’t have so much space to improve. There are small details here and there, and it’s also how to find them, how to find the best balance. For example, Novak this year had an amazing season, winning so many matches in a roll. And it’s maybe because of the timing in his career, the coaching, or just different things. It is important for me to find something similar in my own game to be able to reach my full potential.

Who will be your main opponent for the title here?

It’s tough to say. They are all different players. I played last week against Felix Auger-Aliassime. He is a great player with a great potential, and definitely has a great career. From this group and from the results this season Shapovalov had a great success and played great tennis. And I believe he is also motivated to finish the season well with this good tournament here. So he will be really motivated to do well.

What does it mean for small countries like Bulgaria and Croatia to host a 250 ATP Tour tournament?

It means a lot. I know how much it meant for me as a young player. My two first ATP tournaments were in Umag in 2005, when I was still a 17-years old junior, and in 2006 in Zagreb, when I managed to get my first ATP victory. For young players it’s great that they can watch tennis live, hopefully with enough seats in the stadium in this situation. Also young players can watch world class players live. Some of them will be able to play in the tournament qualifications, some double possibly. So it is a great way to see how the top players play, and also maybe practice with them during this week. In general, it helps a lot for the young players and for the development of tennis.