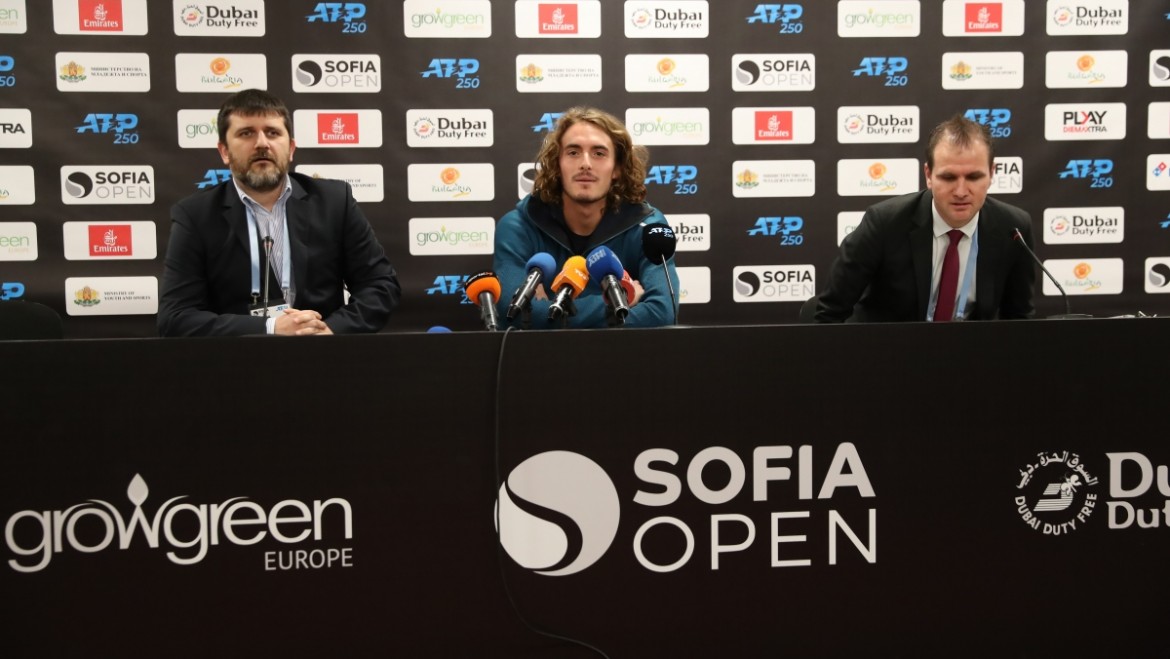 The world No 12 Stefanos Tsitsipas came in Sofia for his second Sofia Open campaign. The situation for the champion in the 2018 NextGen Masters champion this year is quite different. He is coming in Sofia after knocking out the defending Australian Open champion Roger Federer and his first Grand Slam semifinal in Melbourne. Tsitsipas, who was defeated in the first round in the qualifications in 2017, now is second-seeded in the Bulgarian capital. He talked with local media on a special press conference in “Arena Armeec”.

Stefanos, how you feel in Sofia?

It is great to be in Sofia. It is my second time here. I feel much nicer this year because last time it was snowy and very col. This time the weather is perfect. So I really enjoy my time here. The organization is fantastic. People seem to appreciate me being here, so I love them back as well. What I hear – people from Greece will come here to support. That is a nice thing to have. Thanks to the organizers for inviting me. I think this is an incredible tournament – a big Centre court, everything is very, very organized – the physios, the food.

Two years ago you played here, but it was much more different. You played on Court 1, lost to Miljan Zekic in the first qualifying round. What changed for you since then?

I had a lot of defeats, I don’t know about that specific one. What changed? Obviously, it was one of those matches that I had to learn from. Because I do believe that with my loses I learn a lot and this is how I develop as a player. I had to lose many times to understand the game better and what I have to do. With certain situations, I would say I go more experienced and I know what to expect next. I get a better understanding for the game antd that the hard work and the attitude to come back on the court for practice and to push myself more.

The expectations now are bigger, even for winning the title. Are you ready psychologically and physically after Melbourne?

To be honest, I didn’t have many days to rest after the long run at the Australian Open, so I had a couple of days off and then I had to come back to the Academy I am practicing. To be honest and sincere with you, I am not on 100% recovered from the last tournament. But I know with my will and my determination at work I still have a lot of chances of doing well here. I like to enter the tournament with light expectations and not to expect too much from myself. I think if things go well it will be fantastic and it is a good tournament to do well.

It was like a dream come true. After that match, I felt like my brain was exploding. It was a magical moment that I will never forget. The first time is always special. Beating your idol. As I used to say before – it was great when your idol is becoming your rival which is nice. Obviously, next time when we face again it is going to be different. He will know what to expect. And I have to be more prepared for that. I like to play this kind of players. You can learn a lot of things even when I win – I still can learn a lot of things from them. These are the moments I am playing tennis for.

You looked really upset after the loss from Nadal. How do you look now on this loss and is the gap between you and Nadal and Djokovic such big?

That is what I am training for – to beat these players. Otherwise, I will not be able to go on the court and practice every single day. For sure I am practicing for these moments. I really want badly to beat – Djokovic, Nadal, and Federer, and Marin, and whoever else in the future. Because, as I said previously, these players will make me a better player and I will know how to deal with certain situations much better. So was a bit down with myself on this press conference then. I knew it was a big chance and if I could potentially make the final. I thought I was playing really well, I really wanted to take the best from this tournament. I felt disappointed that I had to leave the tournament by losing an easy match for him, I would say. But I am going to try to change this and improve to avoid this kind of situations.