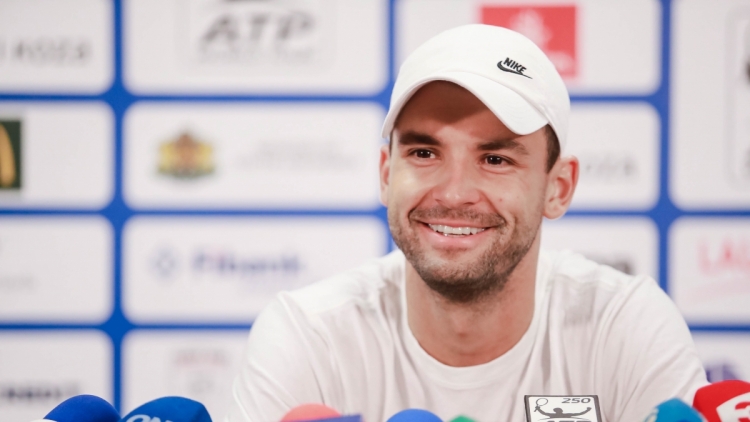 Grigor Dimitrov is a man in demand this week at the Garanti Koza Sofia Open. A national hero even before the 2017 Australian Open, his status has only elevated after his exhilarating semi-final with Rafael Nadal in Melbourne. He has turned his whole nation into avid tennis fans.It makes for perfect timing for a homecoming for the 25-year-old Dimitrov, who is set to play an ATP World Tour event in Bulgaria for the first time. It will be a nostalgic week for the right-hander, who will walk out to the support of 10,000 fans, including his nearest and dearest friends and family, for his first-round match on Thursday night. “It’s amazing,” Dimitrov told ATPWorldTour.com on Monday, following a practice session with top seed Dominic Thiem.

“I think the last time I competed out here I was a junior, playing on the Futures on the clay courts. It’s very special. I don’t get the chance to come home often, so every time I’m here it’s always pretty hectic. But what can I do? It’s part of the game. No excuses. I’m here to play tennis,” added the Haskovo native, who was applauded into his pre-tournament press conference on Saturday before taking a selfie with the assembled media.

“My family have always been by my side and supporting me throughout my career. Even when I’m not doing well they still think I’m the best! Nothing substitutes the love from your family. To play at home, in front of them, it’s a feeling that you can only have as a player.”Bulgaria came to a standstill as Dimitrov battled Nadal for five sets a week and a half ago on Rod Laver Arena. For a nation starved of a sporting icon since footballer Dimitar Berbatov played in the English Premier League, everyone was behind Dimitrov’s every shot. It was joked that the only Bulgarian at work that Friday was Dimitrov.When asked his reaction to the level of interest, Dimitrov exclaimed, “I was excited! I actually asked myself that question (‘What was it like back home?’) and wished I could just have a peek at those kind of moments, even though I was performing. I honestly wished I could see it. I appreciate it. Bulgaria’s a small country. We don’t have that many sports right now and if I can bring that to the whole nation it’s pretty amazing.”

Victory was so close for Dimitrov, who had come into Melbourne on a hot streak, winning the Brisbane International presented by Suncorp at the start of the season. But he couldn’t convert two break points in the eighth game of the fifth set, and Nadal eventually prevailed, denying Dimitrov the chance to play Roger Federer in Dimitrov’s first Grand Slam final.It was a long way from home for the young man who first started playing tennis against a wall when his mother handed him a racquet at the age of three. For someone who describes tennis as “my passion, my love, my work, my best friend,” defeat in Melbourne was difficult to digest.

“I think it was very tough for me,” said Dimitrov. “As soon as the match ended I was in tears in the locker room. I was replaying the match at least 20 times the same night. I slept about two hours. It was not really the most pleasant day after.“But then I kind of realised that I got that far and I just had to get on with it. That’s the next step. I don’t want to discourage myself and I just need to keep my head high. Keep on working. Stay on the ground, stay humble and keep up the good work.”Dimitrov is no stranger to pressure, having shouldered national and international expectation on the ATP World Tour throughout his career. It has only increased after Melbourne and as such, it is a steely eyed, calm, focused and determined Dimitrov who is prepared to take on a strong field in Sofia, featuring Thiem, David Goffin and defending champion Roberto Bautista Agut.

“I have to deal with the pressure, with the media, not disappointing at home. I’m aware of all these things and I’m just me. I’m going to do me. I’m going to give myself the best preparation that I can before my first match and hopefully everything unfolds on a positive note for me.