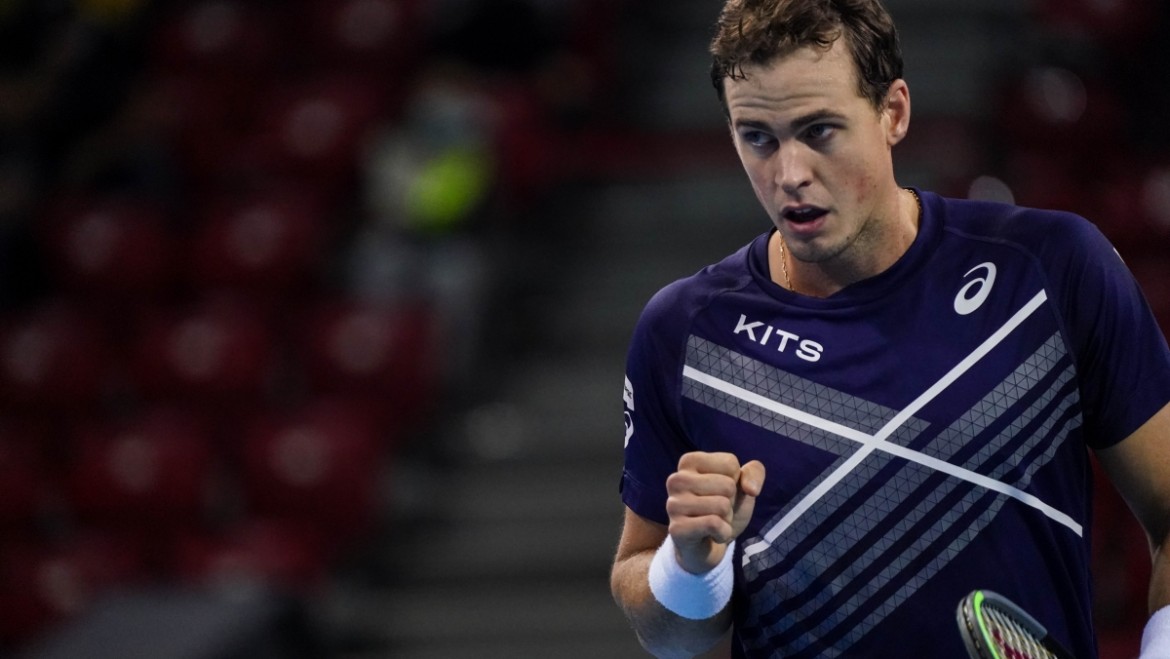 Vasek Pospisil is the second player that secured his place in the quarter-finals of 2020 Sofia Open. In the last match on Tuesday, the Canadian won against the fourth-seeded Jan-Lennard Struff 6:3, 6:4. He is one of the three Canadians in the main-draw along with the first and second-seeded Denis Shapovalov and Felix Auger-Aliassime.

Here are some of the questions and also Vasek’s answers:

What was the turning point of your career?

My career, or my last year? (laughing) About my career, I would say in 2013 at the Roger’s Cup, I reached the semi-finals. That was probably the biggest turning point, tournament of my career. Then, last year I had surgery and came back to the Tour. Maybe Shanghai cause I played really well there and it was the first time I played at a really high level after being back from surgery. I got a lot of confidence after this event. I think I qualified maybe in the third round. So I would say, maybe Shanghai last year.

Do you consider yourself the most popular person in Vernon?

(laughing)  I don’t know. It is a small town. I come from a really small town, 35 000 population. Maybe one of the best-known sports players in the town. I wouldn’t say the most popular. That is a tough question.

Carling is very popular in Vernon, did you practice it?

No, I didn’t even know that it is popular. I’ve been on the pitch just one time in my life, and there was curling during a tennis tournament. So it was U14 Nationals in Edmonton, Alberta, there was a curling ring in the same building with the tennis courts. That is the only time I went to curling. But it is fun to watch. I actually enjoy to watch it. Maybe that is the Canadian in me.

What is your favorite TV Show and do you have time to watch it during the tournaments?

It is funny, I don’t really watch TV very much. Now I am watching the show…what was it…Oh, my Gosh, Peaky Blinders – it is really good. I think my favorite ever is Breaking Bad. I am not much a TV-guy. I really started to watch the last couple of months, but during the lockdown, I didn’t watch much TV. I was pretty productive, and I worked on a start-up company I have started with two other business partners.

What are you enjoining the most here in Sofia?

I haven’t been able to see the city because we are in a bubble and we are locked in the hotel and the courts. But I still enjoy my stay here. People are great. So this is always the most important thing when you are travelling to a new country. If the people are friendly, it usually makes the whole experience. Unfortunately, I have not been able to see any of Bulgaria. Maybe after the tournament, when I am not in the bubble, I can check the city. But so far, so good I am enjoying my time here.

Have you tried already any typical Bulgarian dish?

No, I haven’t tried any Bulgarian dish, and I will wish I could ask – what is the typical Bulgarian dish that I have to try because I don’t know. I will ask John Millman.

Who is your favorite sportsperson?

Tough one. Gretsky is kind of a legend. In Canada, we are a hockey nation, so Gretski is the first thing that comes to mind. Obviously, Steve Nash. But I will be biased with all the Canadians. I have Jaromir Jagr actually. I am coming with a Czech background, so I loved to watch him playing for the Penguins.

What do you think about the organization of the tournament?

I think it is great. I am really enjoying my time here. They are treating the players extremely well; there is food all day long. This is great. Details like that make the player’s experience really nice. The hotel is nice. Everything is super well organized. I have a very smooth, very great stay here so far. The tournament organizers did a great job to make the players feel comfortable. We have a really nice launch at the hotel.

What do you know about Bulgaria?

Not much. I know Grigor Dimitrov. I have to charge my Bulgarian history. I know Grigor very well, I know him since we were juniors. He is a big superstar here. He is my closest connection with Bulgaria. Going back to 14-15 years, we played doubles together, US open Junior.

Should we expect you here next year?

I like rock, alternative. My favorite band of all time actually is The Beatles. When I was young, from the age of 11 to 15, for four years, I didn’t listen to anything else, just The Beatles. Even to this day, I know the words of pretty much every song they have written by heart. Now I like Coldplay, The Lumeneers, The Shins, this kind of Indy bands, rock-bands.

Who is your closest friend on the Tour?

I would say I am really friendly with Felix. All the Canadians guys are pretty close, with Denis and Felix. Felix is such an amazing guy and amazing person. And Daniel Nestor, before he retired. He was really my good friend. I am quite friendly with a lot of guys. The Serbian guys are really nice.

If tennis didn’t exist, what would you choose to do?

I probably would be in a different sport. Maybe soccer, maybe another sport. I was very active as a kid, I loved athletics and doing different things. If I weren’t an athlete, I would run probably a business. I am passionate about this, and hopefully, after the end of my career, I will be into this.

What do you remember from you match with Milos Raonic against Jokovic and Nadal?

Those crazy match. It was my first major ATP Tour match and was against the world No 1 and 2. Obviously winning that will be something I will never forget—crazy experience. I was so green, happy and lucky, just super excited to be on the court and playing that match. It was an experience that I will never forget. It was the first time a have been on the big stage, playing against big names and to get the win…I remember the crowd was going crazy for us, obviously because we were locals and we were playing at home. Definitely, it was a great moment in my career.