HomeNewsSofia Open 2022Grigor Dimitrov: Here were one of the most... 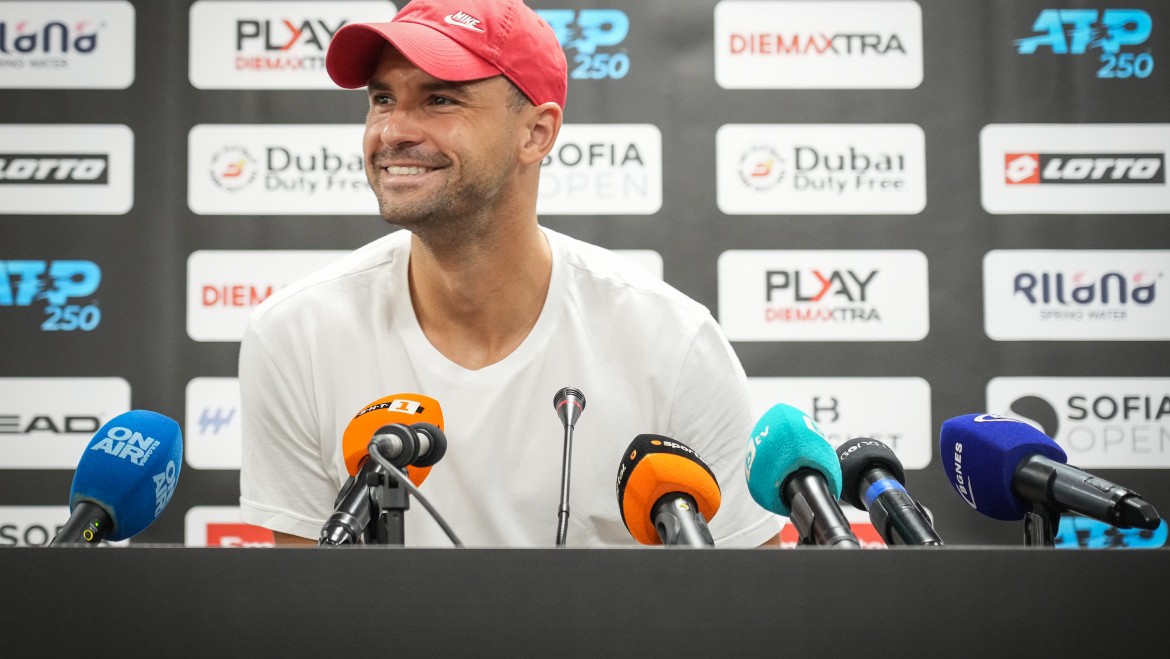 The tremendous Bulgarian star of world tennis, Grigor Dimitrov, has already held several training sessions in Sofia for his participation in the Sofia Open 2022! The seventh edition of the tournament of the ATP 250 series in “Arena Armeeц”, September 25 to October 2! The former world No. 3, the 2017 tournament champion, is seeded at No. 3 and will enter directly from the second round, where he will face the winner between Mikael Humer (Sweden) – Ilya Ivashka (Belarus). Today he gave a long press conference about the tournament and his expectations for next week.

How do you feel after all this time, after that moment when I kissed the court here? Now you’ve trained, and you can’t wait to go out and play?

It’s like I never left. I feel good. For the past few days, I’ve been looking for every opportunity to practice on Center Court.

The atmosphere is again at a very high level. We start next week, and I’m impatient to try it.

When was the last time you returned to those moments – the kiss on the court and the 360-degree selfie with the fans?

In 2017, there was a debate about whether the audience should support you so loudly. What is your message to the fans this year? Are you ready for a mighty “Machkay, Grisho!”?

How are you feeling right now? Have all the injuries subsided?

I’m okay for now. After the US Open, I had time to rest, do some general research, build up training longer, and feel good. Indeed, after the US Open, I was not in shape beyond training. I just wasn’t feeling well. But I wanted to feel as good as possible for these weeks. So maybe I didn’t go to play at Metz, perhaps because I wasn’t ready. My goal was to be 100% coming to Sofia. Right now I feel very well, and I am calm. I am with you.

Certainly, the emotions in Sofia are many and positive. How do you manage to concentrate with all the positive energy flooding you here?

I try to use it with me. I don’t think I need to fight it. On the contrary, you have to accept it and move forward with that energy. Wherever I play, whenever there is a Bulgarian audience, I always feel excellent and try to use it. Of course, this feeling is even more enhanced here. The people who will come to watch… there’s nothing better than playing on home soil and knowing that everyone on the sidelines is rooting for you.

Are you happy with your year? And are you already thinking about a new coach?

We are considering a coach. For now, the decision was made. I won’t be in a rush to make a decision.

The year as a whole was… well, good. Of course, I expected a bit more of myself at certain times, but there were really few injuries, and things that didn’t work out. This is the sport. Tennis is a year-round sport. Every single week we have tournaments. Maybe sometimes, when you miss weeks without training or have health issues, it takes a little longer to catch up.

As a former Laver Cup participant, I assume you’re keeping up with what’s happening now. Friday was Roger Federer’s last match. Roger drove the ball between the peg and the net through a hole. Do you know what comes next? Is there such a rule? And what is the most valuable piece of advice Roger has given you? Or who is the first one that comes to your mind?

Basically, as far as I know, the ball has to go over the net’s top. I can’t answer it better. And maybe he wanted to get her out of there. However, we all know his precision is quite famous.

Advice… Before posting a photo with him on Instagram, I wanted to write something. I just didn’t know what to write about him. I made one draft in the morning, but it didn’t work out, and another one in the afternoon. It did not work out. Third, fourth. I started asking people around me. I couldn’t find the right words. And I remembered that he had written me a message — a long one after my match with Rafa in Australia. I came back, and logged into my messages. I still have that message. I started reading it. That’s where I found the words. Something I’ve always admired about Roger… We all know his game. But…His mindset is to always have the next shot, the next point. That’s the thing that comes to mind when I think about Roger. Yes, the shots, the game, the slices, the serve. But his very mental attitude during a match, before a match, after a match, loses, wins, is the thing that I admire the most.

And what’s the best advice you ever got from your dad?

What’s the best advice (looks at his father)? There are many, yes, there are many. I can’t say one. There were times I listened, times I didn’t. Now, so after the years…The Family. Yes, the family. It starts from there.

This year, the two-time champion Jannick Sinner, the champion of the last Masters – Carreño Busta, and one of the biggest talents in the Tour – Lorenzo Musetti are taking part in the tournament. So which of them, or someone else, will be the biggest opponent here?

Match after match. That’s it. It doesn’t matter. Whoever I’m playing against, I want to watch from my side of the net. This is the most important. To enjoy the game, to play well. To try the things I’ve trained for, that’s the most important thing for me. I’ve played with everyone, I’ve won against everyone. So I’m not afraid of anyone to play against.