Grigor Dimitrov: I was shivering! 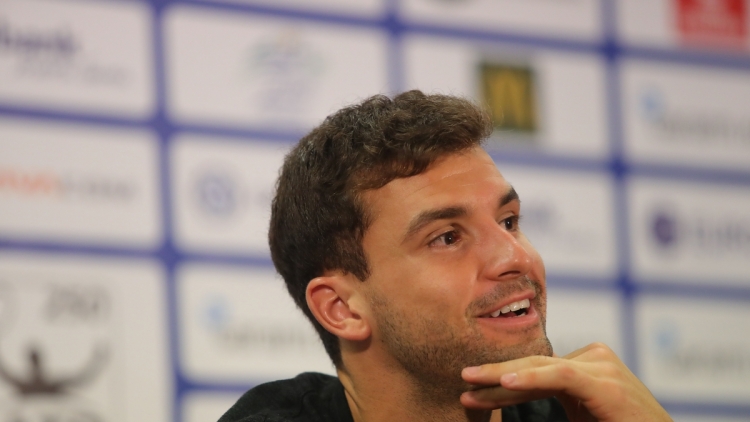 I love to play on Sunday, said the Bulgarian

Grigor Dimitrov won his first Garanti Koza Sofia Open match. The Bulgaian won against Jerzy Janowicz 4:6, 6:3, 7:5. Here is what Dimitrov said at the press conference after the match:

How the crowd did helped you today?

It wasn’t an easy match. As I said on the court – this victory is for all the fans. It is not easy to play such a player. Especially for your first match of the tournament. I knew what to expect, but I didn’t expect his big serve. I am happy with this match. So, now I am in the tournament. No way back.

Did the crowd stun you in the first set?

No, I think it was my fault. I had a bad game, made two unforced errors, two double faults. Year and a half ago I played an exhibition game here against Gael Monfils and I always try to imagine such an atmosphere, to enjoy not only the fact that I am playing in Bulgaria, but also the tennis, the game.

Janowicz played a match more here, in Sofia. Do you think that this helped him to adapt easier?

I think, he played well in the whole match. Might be it helped him. He knew the small details of the court. There were some ball that didn’t bounce well, but he was there. When you are a world level player you feel the court better after the first match. Anyway, I think today I did it well.

Do you think that today you won in refinement?

Everybody can serve with over than 200 km/h. But sometimes you ask yourself “Does it matter?” Sometimes you can be more delicate, to save some energy, to play with better strategy. His tings help. I think the point I won when it was 3:2 won the game.

You played in Basel against Roger Federer. Can you compare the atmosphere?

The stadium here is bigger. I played a lot matches like this. But the crowd here was louder. I can’t explain how I felt. I was shivering by excitement. Today was one of those matches I enjoyed most in my career. I was under pressure. For sure. But I am happy with the victory.

How do you feel physically and do look forward, to Sunday?

Sunday? But tomorrow it is Friday. Sunday is my favorite day to play!

Tomorrow is Friday, so I am focusing for a tough game against Troicki. I can’t remember an easy match against him. I am preparing day by day. Today was the same. I expected the way he played. Everybody is doing their best because he knows that this is the standard and that is what a need for the win is. This makes you to keep highest level, to be serious, to have the discipline. These are the important things.

The crowd booed on him. What influence had this on him?

This is part of the game. I played such matches too. I played at the quarterfinals against Andy Murray at Wimbledon. It happened before. You know, the atmosphere is the same when you play Davis Cup. You have to be ready for such things. You have to be focused on your own game.

What kind of changes you plan for your next match?

The whole strategy will be different. It will be absolutely different kind of opponent. But I don’t think about this now. I want to play my best tennis, to be more effective, to be more aggressive.

There was a video in Melbourne, you sang there. Are you practicing a new song, will you sing here too?

We’ll see. May be if everything is good – I can think about this on Sunday.

What was your biggest problem today on the court?

It is never easy. In any match. I Australia I didn’t play my best tennis in the first matches. His first serve was never less than 220 km/h. I was trying to find a solution.