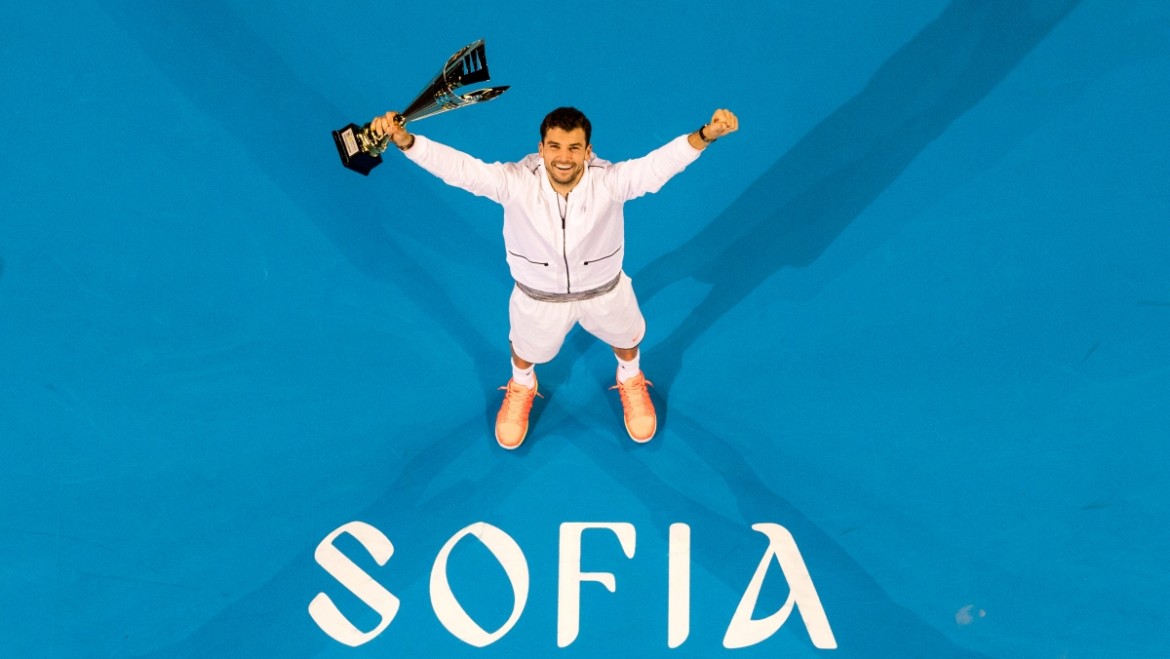 The biggest star of Bulgarian tennis history Grigor Dimitrov is coming home for the new timed Sofia Open. The former No. 3 of the world is will be back to his country for the first time since 2017 when he claimed his 6th title, but the first on home soil.

The 5th edition of the Sofia Open will be held – for the first time in the tournament history -in autumn from September 27 to October 4 at the Arena Armeec.

“I am excited and happy to be coming back to play at the Sofia Open this year. The memories I have from 2017 are unforgettable and the support of all the fans and playing in front of them was just amazing. I look forward to seeing everyone back at the Arena Armeec in September 2020”, said the best player of Bulgaria.

Three years ago Dimitrov had an inspirational season reaching the semifinal at Australian Open for the first time, winning tournaments in Brisbane and in Sofia, capturing his first Masters 1000 title in Cincinnati and concluding 2017 as world champion by winning the Nitto ATP Finals and on No. 3 – his highest – position at the ranklist.

Ending last year the Bulgarian No.1 player defeated Roger Federer in a five-set thriller at the US Open for the first time in his career. Starting 2020 in Sydney, with Dimitrov’s leadership his country beat Great-Britain and Moldavia at the ATP Cup.

Bulgarian fans will have the opportunity to experience another unforgettable emotions seeing his favorite player at the nation’s largest indoor arena.

In 2019, Sofia Open has been the strongest field among the ATP Tour 250 tournaments of the season. Five of the participants – the champion Daniil Medvedev, Stefanos Tsitsipas, Matteo Berrettini, Gael Monfils and 2016 champ Roberto Bautista Agut, finished the year in the Top 10, Stan Wawrinka and Karen Khachanov in the Top 20.

The Sofia Open’20 promises again top-level tennis and a real spectacle for the audience with the first announced name, and the most awaited by the Bulgarian fans – Grigor Dimitrov – who has made it back into the Top 20 and is looking at the Top 10 or higher !

Brandplus Inc are the sanction rights holders for the ATP Tour 250 sanction, managing and staging the Sofia Open in association with the Bulgarian Tennis Federation.

“I am happy we can celebrate with all the tennis fans in Bulgaria with the wonderful news that Grigor Dimitrov will participate in the Sofia Open in 2020. The previous four editions of the tournament in Sofia have been extremely successful and we are expecting the fifth edition to be a world-class event, that will make Bulgaria proud. There were 39 ATP Tour 250 tournaments in the world last year and Sofia Open’19 was one of the strongest with an exceptional player line up, quality tennis and great interest from the spectators. From 2020, the Sofia Open has a new slot in the ATP calendar and will take place in September and our goal will continue to be developing and growing the Sofia Open tournament”, said Bharat Godkhindi, Managing Director of Brandplus Inc.

“Sofia Open is the most significant global sporting event to be held in Bulgaria in 2020. Sofia Open 2019 was watched by over 45 000 spectators at the Arena Armeec and reached 280 million international television audience, and millions across the world will get to watch the tennis matches from Sofia once again, and be able to talk about the country of Bulgaria. Sofia Open is already a brand in the tennis world. The strong competition and the excellent conditions make the best advertising itself. The top tennis players are happy to come back to Bulgaria or they gladly accept the invitation to come for the first time after hearing some positive feedback from their colleagues who have already played at the Arena Armeec. Undoubtedly, the players are also attracted to the public, as Sofia Open is one of the ATP Tour 250 tournaments with the highest attendance. The great Bulgarian fans are the main reason the tournament to stay in Sofia. The fifth edition of the tournament really promises to be extremely intriguing for the Bulgarian fans. The participation of Grigor Dimitrov is also very important for the thousands of children who will have the opportunity to be as close as possible to the best Bulgarian tennis player, to watch him play, to take photos and unforgettable memories. To inspire as many kids as possible to play tennis – that’s our main mission. I wish Grigor Dimitrov all the best at the 2020 Sofia Open and hope the tournament will be a part of his journey to return to where he has been and where he belongs in the world ranking“, said Stefan Tzvetkov, President of the Bulgarian Tennis Federation.

Tickests for Sofia Open 2020 are on sale from January 14 at www.Eventim.bg

Founded in 2003, Brandplus Inc. has been involved in the areas of Management and Consultancy for international sporting events, global sponsorship, live broadcast television production and television rights, and LED management. Brandplus Inc. are closely associated with the management of the Dubai Duty Free Tennis Championships (ATP 500 and WTA Premier) staged in Dubai, United Arab Emirates, and are the sanction rights holder for the ATP 250 sanction currently held in Sofia, Bulgaria.

The Bulgarian Tennis Federation was founded in 1930 by the largest clubs in the country, and the following year became a member of the International Tennis Federation. The BTF began organizing national club championships in 1937. Since 1964 Bulgaria has participated in the Davis Cup and since 1966 in the Fed Cup. In 1977 the BTF became a member of the European Tennis Association. Every year in Bulgaria there are tournaments from the international calendar of all age groups – up to 12 years, up to 14 years, up to 16 years, up to 18 years, men and women and veterans. The BFT runs special programs, in order to develop the sport and the tennis community – ”The new champions” with a goal to support local talents and popularize their achievements, ”Tennis – a sport for all” with free training for children aged between 6 and 12 from all over the country, ”The health academy”, ”Coach education” and the wheelchair tennis. From 2012 to 2014 Bulgaria hosted the WTA Tournament of Champions. Bulgaria hosted its first ATP World Tour event in its capital city of Sofia in 2016.