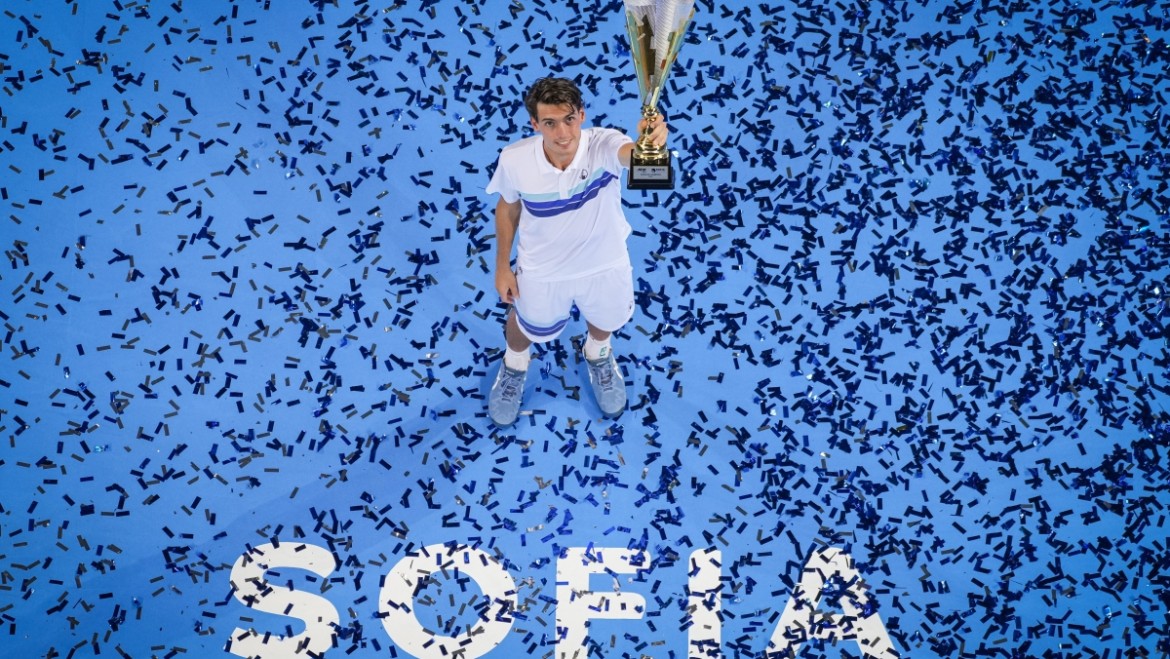 Marc-Andrea Huesler wrote a history page to himself at the Sofia Open on Sunday. The Top-Swiss player overcame #NextGenATP Dane Holger Rune 6:4, 7:6(8) to capture his maiden tour-level title.

Marc, how special is this trophy next to you and will you remember Sofia forever?

Yes, for sure. It is always special to get the first title somewhere. I have good memories from two years ago. Being able to finish off this great week. To win a title is definitely a dream come true. An ATP title is not a thing that a lot of people can achieve. I am really happy that I have been able to do that. I am looking further into the future. And definitely looking to come back here.

You just become the first Swiss with an ATP trophy after Roger Federer. What does it mean for you? How big are your dreams?

I feel great about my tennis. Honestly, I don’t know how far I can get. With the way I play, with the game I have developed. Honestly, I am surprised by myself every week. From April onward, I didn’t have a bad week. At least – I didn’t have a week that the tennis on the court wasn’t good. I didn’t think that I could win this tournament when I arrived here. But then again, I knew it was possible. With the way I played the first two matches, I felt like, “Yeah, I can do big damage here if I am able to keep my game high.” That is for sure exactly what happened – in every match, I was able to put the opponent in difficult situations. Also, today, I got over the tough situation against me, but I played confidently. And I think this is the way you have to play if you want to win tournaments. Who knows how far I can get? I definitely looking forward to it because I feel like I am not fully developed yet as a player. I still feel I have a lot of weaknesses that have to be improved. It will be interesting.

You won this week against three of the seeds in Sofia. Which match was your best?

I think against Carreno Busta. That was the match where I could do anything wrong. I don’t think I missed something. I had 15 winners, and ten mistakes. Something like that. Which is huge. I was serving great, didn’t miss a volley. Everything seemed to be going well. Every match is different. It is always easy to play as an underdog; you get nothing to lose, take your chances. The biggest thing this week is that in the important moments I have been able to win them. Against Musetti was tough.

Against Kamil Majchrzak, you saved two match balls. How did this help you?

Yeah, if I had lost the point, I should be out, so … I feel that match against Kamil was definitely a key match. He was forcing me to play the way I don’t like to play. I had to find the answer to his playing. Every match at the ATP level Is a big challenge. For me to play – I am not used to it yet. I am not used to it physically; I am not used to it tennis-wise yet. For the last couple of months, I have been playing against ATP players regularly. And also have been able to beat a couple, which definitely is very positive. For me, it is the first time to do like this. I think indoor tennis suits for me and I am looking forward to the rest of the season. There were two points, yeah. I don’t know how many times I can make it. But I did. That is the way tennis is. And also, today. A Match point – there was nothing I could do there. And I did an insane passing shot. But then he got set-point next. And then it should be the third set. That is the way tennis is built. You just have to try to be calm and try the best in these important moments.

Will you be strong enough physically next week – you will play in Kazakhstan? And do you expect a wild card for the Basel tournament?

Yeah, physically, I am feeling pretty good. Obviously, I am tired, but more mentally than physically. There are new emotions, and they are pretty big. So, it is special to end a tournament with a win. I had a good talk with my coach to see what the plans were. It makes sense because I was travelling a lot last couple of weeks, but also playing a lot as well. Maybe it makes more sense to get some rest. This is for sure. I have also got injured in the past. It will be clever to learn from these decisions.

Basel is one of my favourite tournaments, for sure. I got to play there if I have a wild card. I don’t know how it looks with my ranking now. But it is looking good for sure. I haven’t talked for this yet, but obviously, I would be happy to play there.

Where will you put this big shining trophy in your place?

I have a shelf at home with a couple of trophies I have collected so far. Two weeks ago, I made a reconstruction; I said that there would be only the trophies from Challengers and ATP doubles. But it is big, and I have to find a different solution for this. If I go to Astana, I will give the trophy to my girlfriend, if I go at home, I will take it with me.

You will get a lot of congrats. Do you expect a message from Federer?

Probably. It would be the first time. He is interested in tennis. He is going to keep watching and especially if the Swiss are doing well. Maybe.

Definitely, big names to be with. I have seen them every time entering to the Center court every time I went out there. I played against Sinner two years ago here. A great player, an awesome player. I don’t know what should turn out if I had to play against him in the final today. But I proved this week that I belong here as well. I have been able to win five matches in a row on a really high level. I am pretty sure that no one thought it will be easy. With a big lefty, playing an aggressive game. I guessed they still have a little respect.