Muller and Klizan into quarter-finals in Sofia again

HomeNewsSofia Open 2017Muller and Klizan into quarter-finals in Sofia... 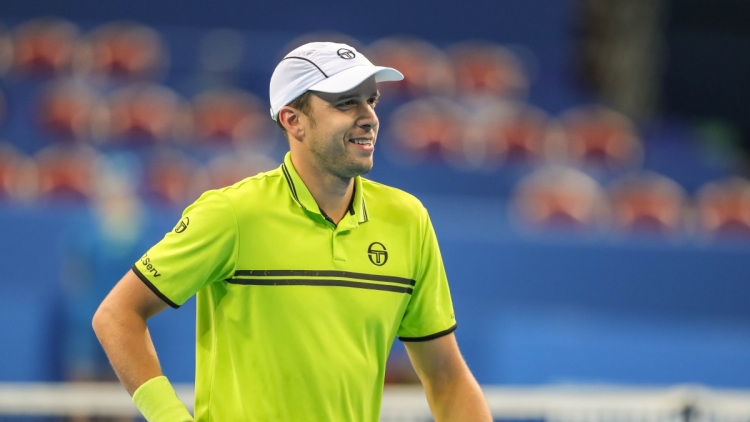 Troicki battled for his place in the last 8

Gilles Muller and Martin Klizan made it to the quarterfinals at Garanti Koza Sofia Open for second consecutive year. Both won their second round matches in straight sets.

Fifth seed Gilles Muller continued his outstanding season with a 6-3, 7-5 victory over Mikhail Youzhny. Muller ran through the final three games of the match to advance into the last eight, where he’ll play fourth seed and defending champion Roberto Bautista Agut. The Spaniard leads his FedEx ATP Head2Head with Muller 4-1, including a win in the 2016 Sofia semi-finals.

The other left-hander Martin Klizan, stopped the qualifier Daniel Brands 7:6 (3), 6:2. The Slovak player will next face the winner between the first seeded Dominic Thiem and Nikoloz Basilashvili.

Viktor Troicki battled for his second win in Sofia. He lost a set, but won against Robin Haase 2:6, 6:4, 6:7 (3) in an hour and 25 minutes. The Serb’s next opponent may be the local favorite Grigor Dimitrov or Jerzy Janowicz, who play later today.

“Last year I came here a little bit earlier. And I played later during the week. And I adjusted a little bit better to the attitude. This year I feel it is faster. Sofia is higher than the rest of the cities and rest of the tournaments. Especially higher than Nis, where I played last. So, yes, the conditions are a little bit faster than normal. That is why the points are faster than usual and the serve is a bigger damage. I need to relax more. I remember last year I relaxed and I played good tennis. I think the conditions will suite me here. Today the opponent was tougher, very experienced. Robin likes to play on hard court. He started slow, he started well. He won the first set pretty easy. But then I got it back together. I cannot say I played my best tennis, he played too good. If I want to go trough I need to play better”, commented after the match last year finalist.

Abaout his next opponent Troicki said: “It is not going to be easy whoever wins. Grigor is definitely the favorite. He did really great this year. He started great in Australia, played brilliant match against Rafa. Six months he is playing unbelievable tennis. Also think Jerzy is difficult to play against. He has serves strong, he hits the ball strong. I have to wait and see who will win and to be ready for the match tomorrow.”