Stan Wawrinka met the most talented Bulgarian kids in Sofia 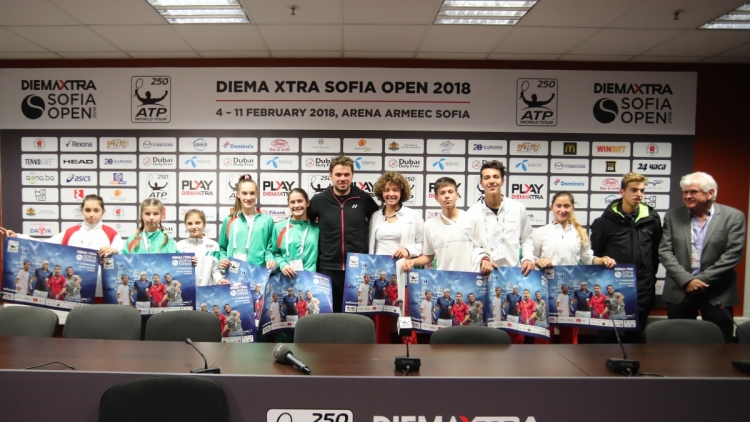 Champion’s advice: Hard work is the secret of the success

Three time Grand Slam champion Stan Wawrinka found time to meet some of the most talented Bulgarian kids in Sofia. He talked with the local prodigies soon after he arrived in Sofia for DIEMA XTRA Sofia Open. Wawrinka answered all the question and made the meeting one of the best experience for the 14 chosen kids. “Hard work and a lot of practices – this is the only way to go to the top,” the Swiss advised them.

Young players showed that the really know tennis. “Do you think that the win against Djokovic at “Rolland Garros” was the key for your success?” they asked. “It is always great to win a first Grand Slam trophy. This is everybody’s dream and when you got it, this stays forever in your memories”, Stan answered.

Rositsa Dencheva, Denislava Glushkova, Katerina Dimitrova, Stela Peeva, Dinko Dinev, Piotr Nestorov, Ivan Penev, Daria Radulova, Antony Genov, Daniela Dimitrova, Gergana Topalova, Rozalina Yuseva, Adrian Andreev and Leonid Scheingesicht were these who had the great chance to meet Wawrinka in Sofia. And some of them made their dream come true. They were chosen by the Bulgarian tennis federation because of their successes in 2017 on the court.
The future stars sent Stan back in time. They asked him if he ever had had plans to become the big champion he is. “When I was 14-years old, I just wanted to practice. To practice more and more. I have never had a plan what titles I want to win. I wanted to be a professional player. To go on my way. The successes came later”.

As a real future professionals, young Bulgarians asked for his best shot – onehanded backhand. “It is good, isn’t it? Thank you! I have always dreamt to win my first Grand Slam title with backhand down the line winner. So I did”, Stan told them, impressing his emotion with this shot.

But the most important advice he gave to the talented players was: “There is no easy way to the top. It is just to practice a lot and to work harder!”

Tomorrow, after Stan Wawrinka – Martin Klizan match, the best Byulgarian prodigies are going to be presented on the Central court.