The winner in “Win a Trip to Dubai”: It was a unique experience! 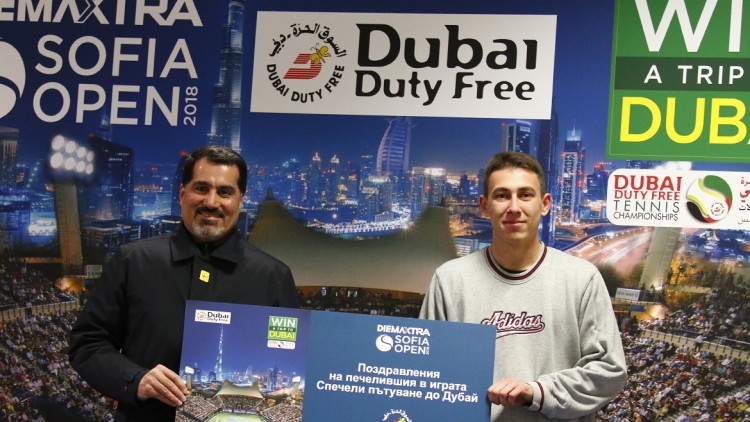 The main sponsor of Sofia Open – Dubai Duty Free will provide an opportunity to one of the spectators in “Arena Armeec” to win a VIP experience. The prize for one lucky fan is a trip to Dubai for two and a visit at Dubai Duty Free Tennis Championships 2019.

The first winner of the grand prize “Win a to Dubai” in 2018 was Radi Kokudev. His name was drawn by the doubles champion Robin Haase and Radi and his girlfriend Hrisi turned to be the luckiest fans of the tournament in Sofia. Wе will know who will be the new lucky winner just before we understand the name of the new champion in Sofia on February 10th. “It was a big experience. The hotel was awesome, great service. The courts were just beside. We visited all the spectacular places in the city. Of course, the most impressive was Burj Khalifa and the singing fountains”, the lucky winners told the organizers.

This year winners will receive two economy class tickets to Dubai, Dubai Duty-Free shopping vouchers worth € 300, 2 VIP tickets for QF, SF and the Final of the ATP 500 tournament during the Dubai Duty-Free Tennis Championships 2019 and 4 nights stay at the Jumeirah Creekside Hotel between 28th of February and 2nd of March. This year Roger Federer applied for the tournament along with Sofia Open 2019 stars Karen Khachanov, Stefanos Tsitsipas, Daniil Medvedev, Roberto Bautista Agut, Nikoloz Basilashvili, Fernando Verdasco, Gael Monfils. Kei Nishikori, Marin Cilic, Borna Coric, and Milos Raonic will be there too.

The raffle draw for this year winner is scheduled for Finals Day (Sunday 10th) at Arena Armeec.

The days and hours you can visit the Dubai Duty Free Free Promotion Booth and join the “Win a Trip to Dubai” game:

(Timings are subject to change so head down early to enter a chance to win this exciting opportunity).

Founded in 1983, Dubai Duty Free recorded first-year sales of US$20 million and has grown into one of the biggest travel retail operator in the world with a sales turnover of US$2.015 billion in 2018.

Now employing almost 6,200 people, the operation has consistently raised the benchmark for airport retailing and it continues to grow. Dubai Duty-Free currently operates some 38,000sqm of retail space at Dubai International Airport and over 2,500 sqm at Al Maktoum International that will grow in line with the massive development plans of Dubai South.

In addition to its retail operation, Dubai Duty Free operates a Leisure Division which includes The Irish Village, both in Garhoud and Riverland Dubai, The Century Village, Dubai Duty Free Tennis Stadium and The Jumeirah Creekside Hotel.

To date, Dubai Duty Free has received 700 awards including the Frontier Award for ‘Airport Retailer of the Year in Single Location’, which was won by the operation for a remarkable ninth time.

Dubai Duty Free’s Executive Vice Chairman and CEO, Colm McLoughlin was also presented with several awards including the “Irish Presidential Distinguished Service Award” and the CEO Middle East Awards for “Retail CEO of the Year”. In addition, he was conferred with an Honorary Doctorate of the University (DUniv) by the Middlesex University Dubai in 2017. In 2018, he was honored with The BURJ CEO “Lifetime Achievement Award” in October and the MENAA “Best Business Leaders Award” for the third time in December.