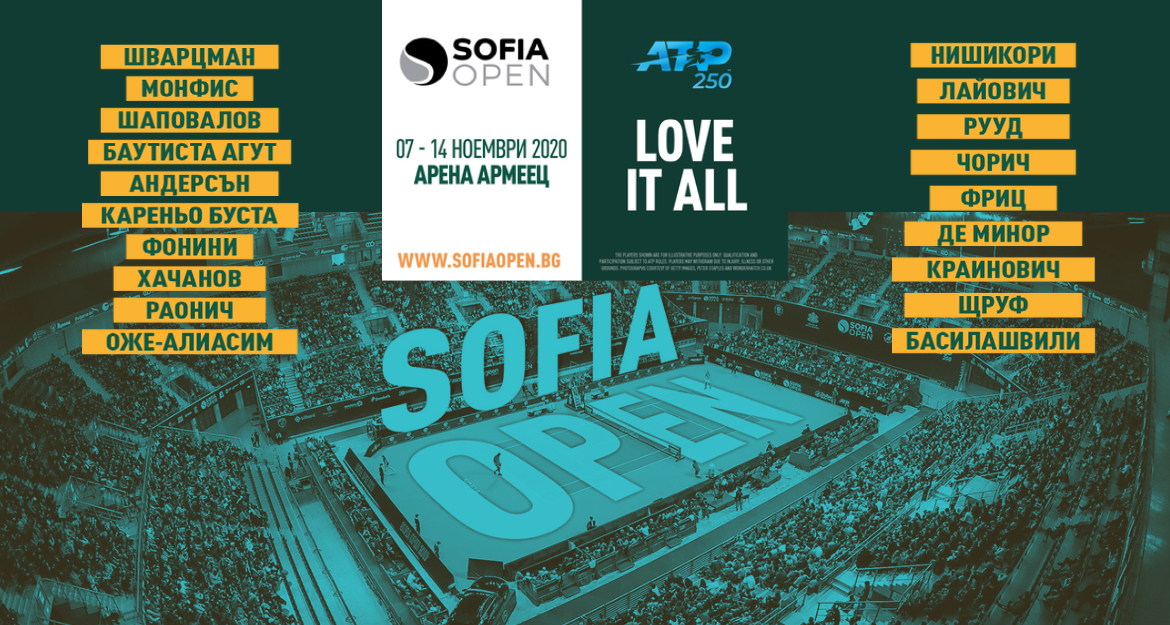 Tickets for the extremely strong fifth edition of the Sofia Open will go on sale tomorrow (October 15th) at 10 am online on Eventim.bg, on Grabo.bg and ipass.bg.

18 tennis players from the top 35 in the world have already confirmed their participation in the Sofia Open 2020 November 7 – 14 at Arena Armeec. Due to the strict observation of all the anti-epidemic measures the places in the competition venue are limited and the fans will be located with the mandatory distance of two seats.

The tickets are in 3 different seat categories. For the first 4 days of the tournament the price is the same for all seats and those who bought tickets earlier will have the opportunity to choose from the free ones at the moment. For the last 4 days, including the semifinals and the final of the tournament, the tickets are at different prices depending on the place in the hall.

All purchased package tickets for the previous dates of the tournament are valid, and their holders will only have to re-validate them in Eventim due to the mandatory limitation of seats and the placement with the mandatory distance of two seats. (Existing Eventim package holders can receive direct information about the possibility of remote revalidation at email: sofiaopen2020@eventim.bg.)

During the Sofia Open 2020 all anti-epidemic measures will be strictly observed. In addition to the two-seats distance all fans in the hall are required to wear a protective mask.

Bulgaria has the unique opportunity to be among the few countries in the world that will host an event from the ATP tour following its suspension due to the coronavirus pandemic. Although significantly limited, the audience in Sofia will be able to enjoy live some of the biggest stars of world tennis. The team of Sofia Open is confident that from 7th to 14th of November, when all eyes of the world tennis community will be focused on Sofia, Bulgarian audience will show the world that it can be a good example.

The impressive list of participants in the Sofia Open 2020 allows fans to watch spectacular tennis matches from the first days of the tournament after the unique achievement for an ATP 250 tournament – all pre-announced participants to be in the top 35 in the world.

The 19 directly accepted players for the fifth edition of Sofia Open are now known. It’s worth noting that 18 of them are ranked in the Top 40 of the rankings with a cut-off at #35. The sole exception is Kevin Anderson who used a protected ranking of No.14 to enter the main draw.

Diego Schwartzman made his FedEx ATP Rankings Top 10 debut on Monday after reaching Roland Garros semi-finals. The tiny Argentinian climbed to No.8 – his highest ever ranking. Schwartzman owns three ATP singles titles. This year he reached the final at Cordoba Open and ATP Masters 1000 Rome.

Gael Monfils will play at the Sofia Open for a second year in a row. The charismatic Frenchman was a semifinalist in his debut in 2019 losing to the eventual champion Daniil Medvedev. Monfils is ranked at No.11 in the world and owns 10 ATP singles titles. The last two of them came in February – at Open Sud de France and the ABN AMRO World Tennis Tournament.

21-year old Denis Shapovalov is the highest ranked Canadian in the world. Since Monday he’s at No.12 after breaking into the Top 10 at the end of September. Last year Shapovalov won Stockholm Open – his first ever ATP singles title.

Roberto Bautista Agut is the winner of the first edition of Sofia Open. The Spaniard won in 2016 beating Viktor Troicki for one of his nine ATP singles titles. In 2019 Bautista Agut reached semi-finals at Wimbledon and was a part of Spain’s Davis Cup winning team. In the current FedEx ATP Rankings he sits at No.13.

Pablo Carreño Busta is a two-time US Open semifinalist and last week he reached the quarterfinals at Roland Garros. The 29-year old Spaniard owns four ATP singles and four ATP doubles titles after winning with Alex de Minaur the Western&Southern Open in August.

Fabio Fognini is a nine-time ATP singles title winner and in 2015 became an Australian Open doubles champion alongside Simone Bolelli. The 33-year old Italian is in the Top 20 of the FedEx ATP Rankings for 113 consecutive weeks.

Kei Nishikori is the most decorated Sofia Open 2020 participant. The Japanese is a 12-time ATP singles title winner and has reached 26 finals. In 2014 Nishikori lost to Marin Cilic in the US Open final. A few months later he climbed to his highest-ever ranking – No.4. Currently Nishikori sits at No.35.

Milos Raonic is another Grand Slam finalist in Sofia Open 2020 field. The Canadian lost to Andy Murray in 2016 Wimbledon but climbed to No.3 in the world a couple of week later. Born in Podgorica, Montenegro, Raonic owns eight ATP singles titles. This year he reached the final at the Western&Southern Open.

Kevin Anderson is a two-time Grand Slam finalist. The South African lost to Nadal in the 2017 US Open final and to Djokovic in the 2018 Wimbledon final. He’s won six ATP singles titles and is a former world No.5. However after a couple of knee surgeries during the last 14 months Anderson sits currently at No.109.

There are also two special exempts into the Sofia Open 2020 main draw that will be allocated in accordance with the Masters 1000 Paris results. If there’s no need for a special exempt the two places will be given to players from the alternate list. As of today it is led by Guido Pella (No.37) followed by Hugo Humbert (No.38), Adrian Mannarino (No.39), Marin Cilic (No.40) etc.