Holger Rune: For the final – it will be who can handle the nerves best

HomeNewsSofia Open 2022Holger Rune: For the final – it will be... 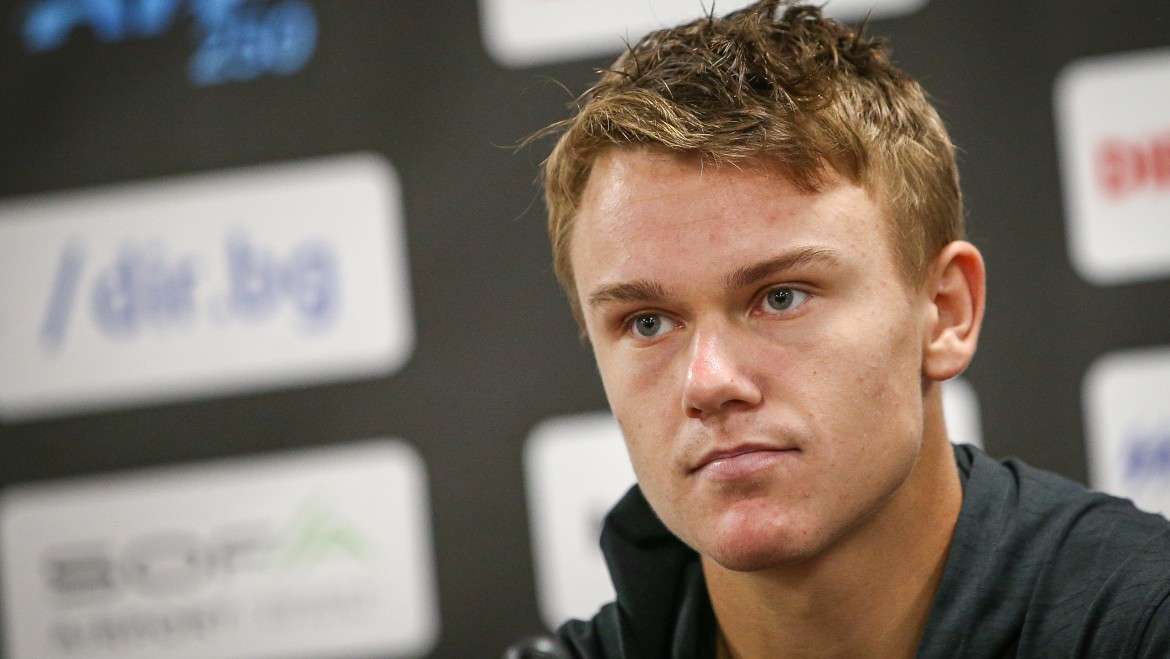 Dane Holger Rune, the No 5 seed, moved into the final of the Sofia Open when Italian Jannik Sinner, the top seed, retired at the Arena Armeec Sofia on Saturday. Rune, ranked No 31, led 5:7, 6:4, 5:2 when Sinner, ranked No 10, pulled out after suffering an ankle injury in the third set.

Holger, congratulations. You are the first that defeat Jannik Sinner in Bulgaria. Your statement for the match?

It was unfortunately ending, of course. It was such a great match. I thought we both played well. It was very good tennis. And the crowd was amazing. There was a lot of support for both, and we both played well. Of course, the not good in the end, I was hoping for, but I am still super happy to be in the final.

What do you think about your performance today, and what changes you made after the loss of the first set?

It was great tennis. We both played well. I was just, you know, telling me in the second set to point myself a little bit, to win some more points and just to be on there for the point, not to let him get easy points. And as what I did, I really tried to play at every end of the court and see how difficult I can make it for him.

What do you think for your Sofia Open final opponent – Marc-Andrea Huesler – you lost to him earlier this year?

He is playing great this year. He is serving amazing. I think he had 26 aces, not this match, but the match yesterday. So, he is having the hell of a serve. So, he is difficult to break for sure. But I am serving well, and I have strong belief that I can do great in my games and when I get a chance, I just have to go for it. It is a final, so obviously, we will be both nervous. So, it will be who can handle the nerves best.

Are you surprised by your progress in the ranking this year? You started from outside Top 100, and you are up to number 26…

Yeah, I mean, obviously it is happening very fast. I am moving a lot of places in the ranking. I just have to be sure that I keep improving every day, and I keep doing the right things. When you keep improving in practice you just have to stay calm. And I practised very good the last couple of weeks. I practised with Daniil Medvedev, so we had some strong practices together. I felt really ready for this week and really confident with my game.

You qualified for the Intesa Sanpaolo Next Gen ATP Finals. Do you think that next year you can fight for the other finals – Nitto ATP Finals?

You reached the quarter-finals at Rolland Garros. After that, your results were not as good for a long time. How you managed to overcome that crisis and play your best tennis this week in Sofia?

I was playing really good in the clay season. Really stayed in focus. I doing it now. I really was playing some great matches and growing my confidence in each match. And the same I am doing here. I just told myself before the tournament that every match can make the turnaround, make the good winning feeling. And I can be better for every match. I said to myself, even though how difficult it can be, just to stay there and dig deep.

Do you remember where you were in April 2019?

What changed for you since that tournament?

I was in Bulgaria, in Plovdiv, I think. I made it to the final. So obviously, I am feeling good in Bulgaria and doing well. Hopefully, this time it won’t be just the final this time. I lost the final, then. Let’s make it different this time. It shows that I am going in the right direction, and I was playing junior tennis there. I have good memories of Bulgaria. I am happy to be in the final and excited for tomorrow.

Have you seen the draw for the next week in Kazakhstan (plays in 1st round against the world N1 Carlos Alcaraz)?

Yeah, I did check it. I thought it was a good start to play Jannik. Jannik and Carlos, who I am playing next week, are some of the best players on the Tour right now. Two young guys also. Of course – Carlos is the best on Tour, he is the number 1. But Jannik was really close to beating him on US Open. I think he had two match points. It was a good chance for me to see where my level is. I am happy with the way I fought today and want just to keep building on my game.