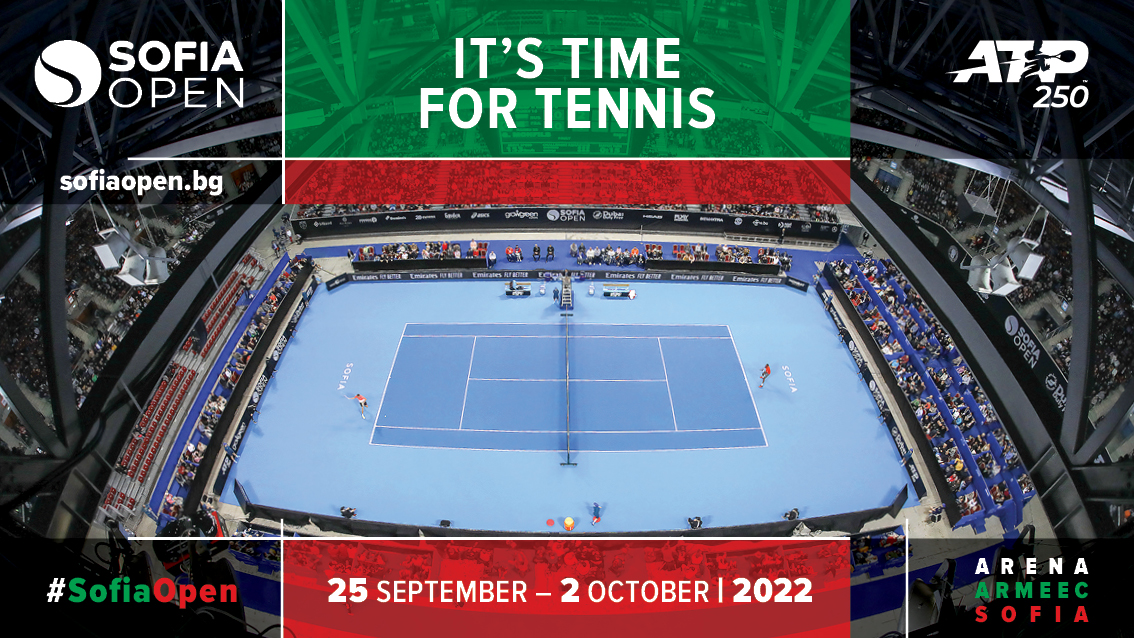 Sofia Open 2022 will be staged from September 25th to October 2nd in Arena Armeec where the worlds professional tennis stars will compete in the seventh edition of the ATP 250 tournament in Bulgaria. The story goes on and this time with the amazing Bulgarian fans back in the arena!

In 2020 Bulgaria was amongst a few countries in the world to stage a tournament after the ATP Tour suspension because of COVID-19. In 2021 the tradition of organizing a world class tournament was continued however due to the fans not being allowed to attend sporting events the tournament was held behind closed doors. This year the stars and the fans will be back together again.

“We are happy to officially announce that in 2022 we will be staging the seventh edition of Sofia Open where some of the best tennis players will come and compete for the winner’s title in Bulgaria. And the best thing is that the Bulgarian audience will once again be able to witness the magic live. It will be a great pleasure to welcome back fans in the arena for Sofia Open 2022”, said Kay Godkhindi, Sofia Open Tournament Director.

“Together with our partners, Bulgarian Tennis Federation, the tournament has become one of the most eagerly anticipated sporting events in Bulgaria and Internationally. Over the past 7 years the tournament has built a strong reputation of attracting some of the best tennis players in the world to come and compete which is reflected in our past champions such as Roberto Bautista-Agut, Grigor Dimitrov, Daniil Medvedev and Jannik Sinner. Because of the tournament Bulgaria will once again will be an important topic in the tennis world with millions of viewers around the world enjoying the show in 2022. This will be a great promotion for the beautiful country of Bulgaria” Kay Godkhindi added

“For the seventh year in a row Sofia Open will be the face of Bulgarian sport all over the world. We turned the tournament into an important part of the ATP calendar. In the tennis world Sofia Open is more than a brand. This is not just a sport event watched all over the world but a world-class product with enormous economical impact that we, as organizers, continue to develop and enforce. Sofia Open is a massive positive promotion of Bulgaria and its capital, Sofia. TV audience from around the world is over 300 million and together with media publications the total reach is close to 1 billion people”, said Stefan Tzvetkov, President of Bulgarian Tennis Federation.

“Sofia Open continues to be an inspiration for Bulgarian children. Sofia Open provides an exceptional chance for the current tennis talents of Bulgaria to play on home soil in a professional ATP event, to be among some of the best in tennis, to grow and to inspire the next generation. But Sofia Open is above all a present for Bulgarian tennis fans. It is a tournament for those who love sport, for the countless tennis friends. And the best for 2022 is that fans and world stars will be together again.

We would like to thank the Ministry of Youth and Sports and the government for their contribution in staging a successful world-class event. And special thanks to the sanctioned right holders – Brandplus, for bringing together the magic of tennis on Bulgarian soil. Thanks in advance to all future sponsors and partners in accomplishing this good challenge. We believe that we will receive the necessary support for this world-class event, which promotes Bulgaria”,Stefan Tzvetkov added.

Detailed info about Sofia Open 2022 tickets will be communicated in due course.